Yazd; the oldest city in the world

Yazd is said to be the oldest city on the world, its a favorite city by Marco Polo and is where all tourists eventually end up [Somehow]. Its one of those places that is hard to leave, one guy had been there 10 days, one a month. It is a beautiful desert town set around a courtyard old houses with plenty of places to lie around and relax, good (albeit expensive) food, and lovely locals. Now I have left and am sitting in a considerably less atmospheric hotel in the much larger city of Esfahan I almost wished I stayed a couple of extra nights more in Yazd, even Esfahan is also fabulous city.

Why i choose Yazd to stay?

However, this is not the trip to be taking extended breaks, So 3 nights in Yazd, a desert town, a different world compared to the crazy traffic and tree lines streets of Tehran or Esfahan. Yazd was quite and brown. Very brown, all the houses (well in the old part at least where I spent more of my time) are made from mud bricks, and have been since, well pretty much forever, seeing as Yazd is officially the oldest continually habited city in the world. Which makes it pretty damn old. Wandering around the old city is a good way to see it, getting lost in little lanes and ancient doorways. 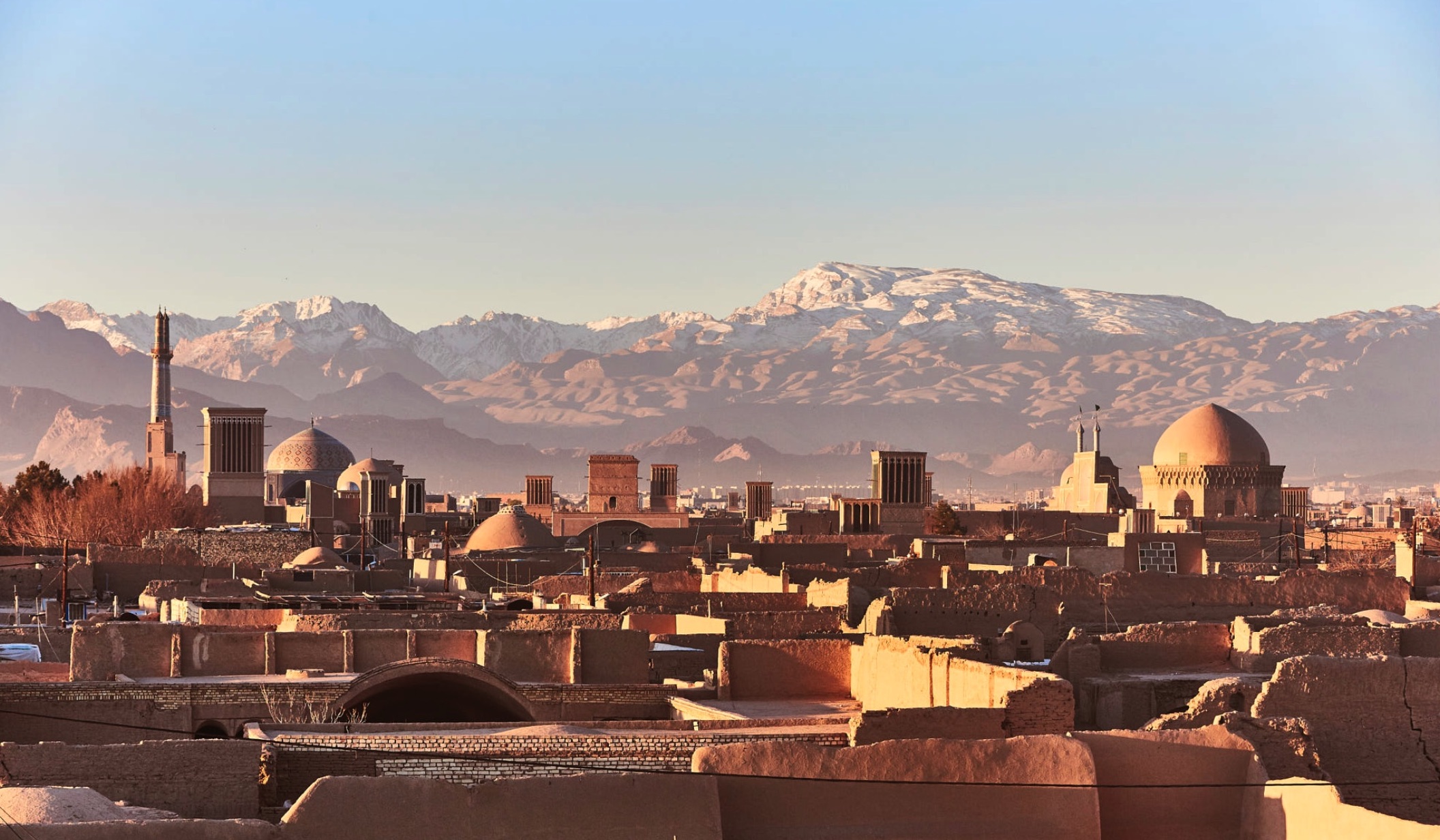 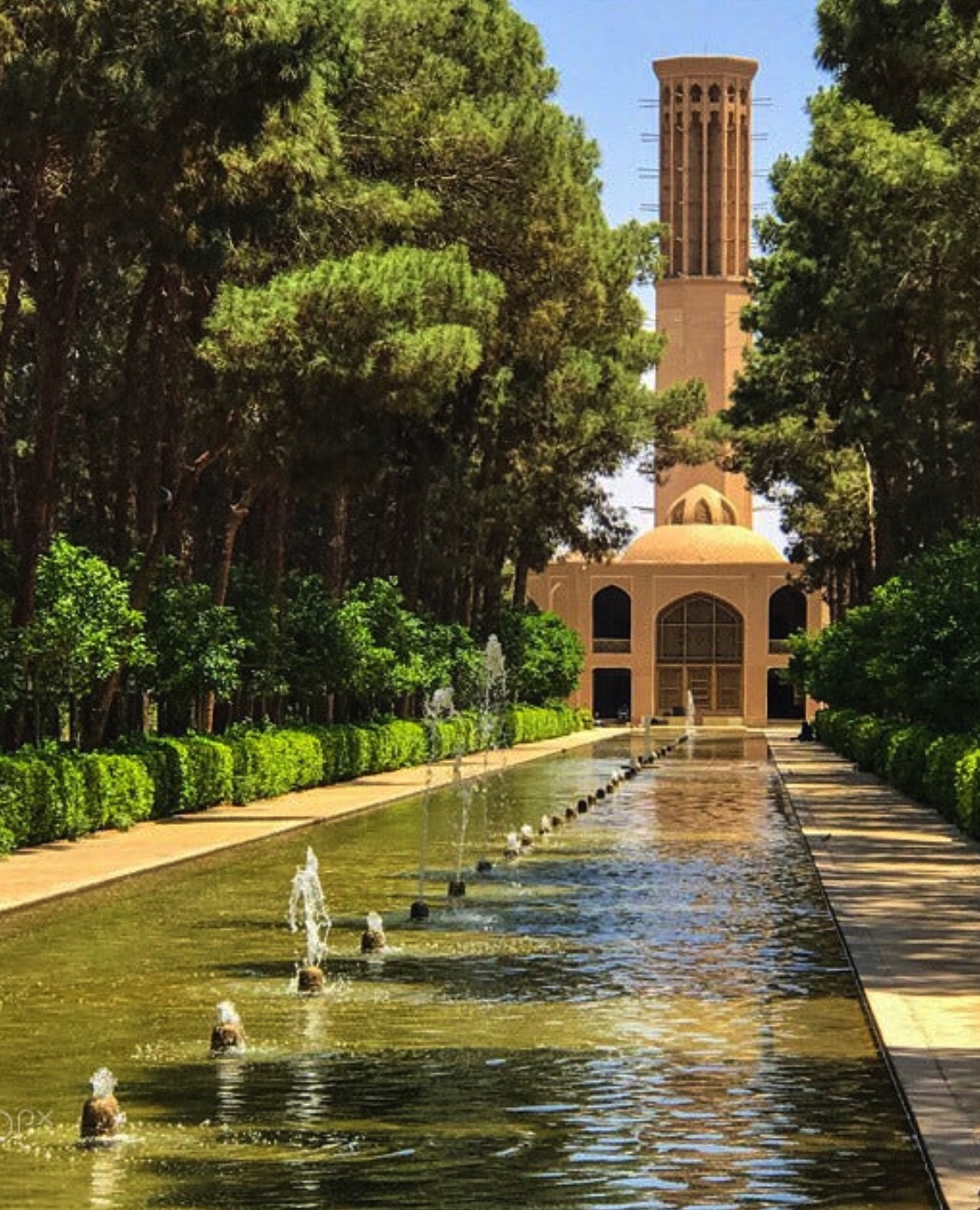 There a couple of amazing mosques, the blue tiled minarets sticking out high above the rest of the buildings. The mosques in Iran are very different to those I’ve seen in other places, all tiled blue. They are all very beautiful although I do have a lot of blue tile photos. Because of the heat the town works on a type of siesta time table, with things shutting up around 1 till 6. When I arrived and took a walk around the old city at this time, it was dead quiet, the occasional person wandering past.

The city is also home to some significant Zoroastrian sites, a religion I had barely heard of until i travel in Iran, but was the first monolithic religion in the world and thought to influence a lot of following religions-including Christianity. One morning I walked the 30min walk to the other side of town to see the all important temple of fire, who’s flame has supposedly been burning for 400 years. Sadly closed, so not fire temple for me. I did climb up the Amir Chakhmaq complex, a 3 story façade which dominates the center square, overlooking a long fountain and grassy areas filled with people. Up there were nice views over the old town and out across to the mountains with wind towers and mosques sticking up above the rest. 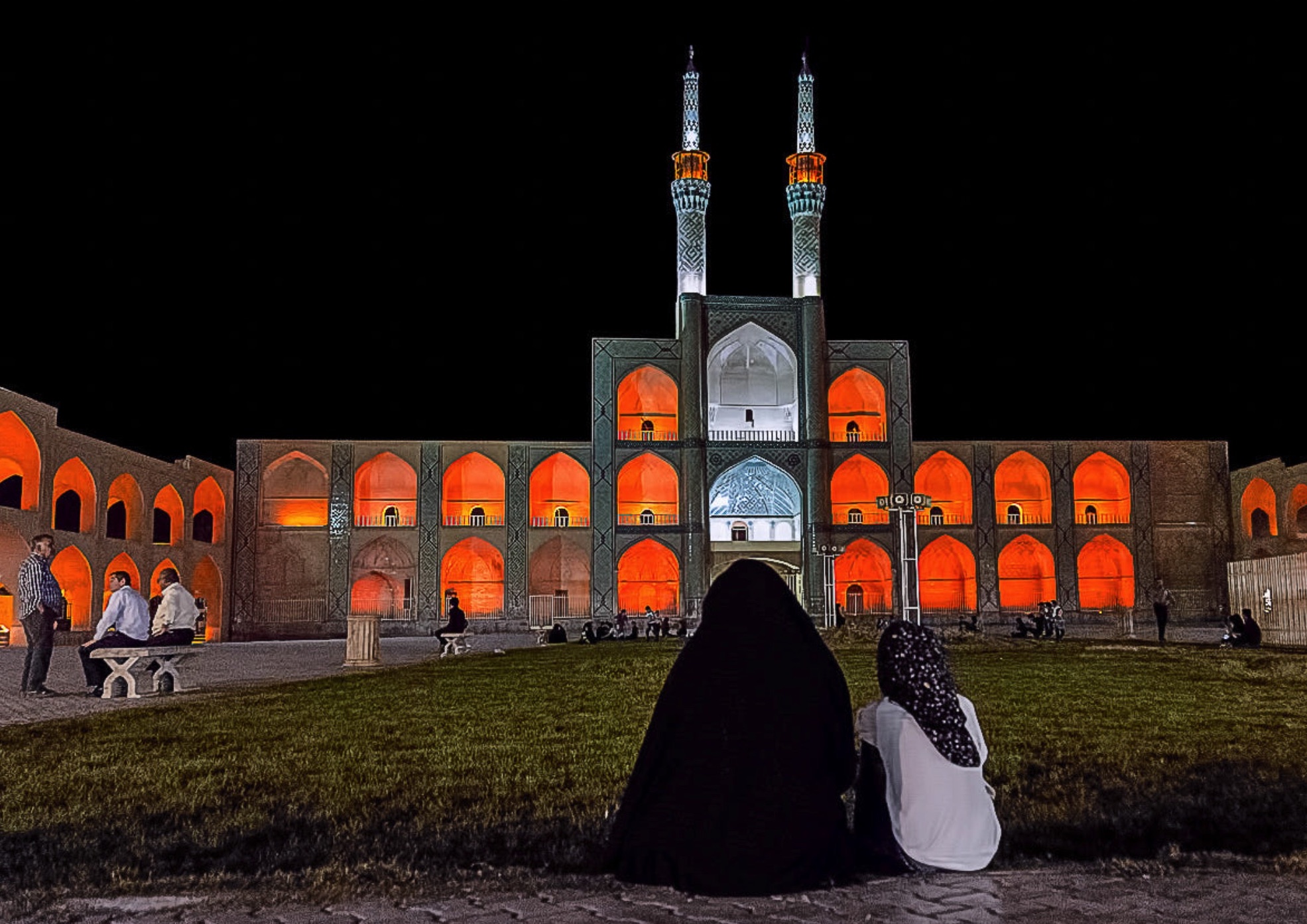 Being in the desert, water is as much of an issue as catching the wind. So the Yazd water museum explains how the water is collected in the nearby mountains and funneled to the city in under ground canals, then stored in these huge underground reservoirs, which are throughout the city. We saw one of these, which just looks like a small circular building, but underneath was a huge 25 meter deep space that used to be used for water. Its pretty interesting. At the museum one of the staff showed me round and explained everything, I also talked for ages with him and a lady, Miriam from Esfahan who had studied in Yazd, its great in Iran being able to meet and talk with normal people all the time, especially women.

Miriam was lovely and told me lots about Esfahan and things to do. Also with everyone they always ask what you think of Iran, especially the headscarf issue, and what people think of Iran in the western world. They know everyone else thinks they are crazy and dangerous but at least you can assure them that you know its not and you will tell everyone how it really is. It’s just good to be able to have interesting discussion. 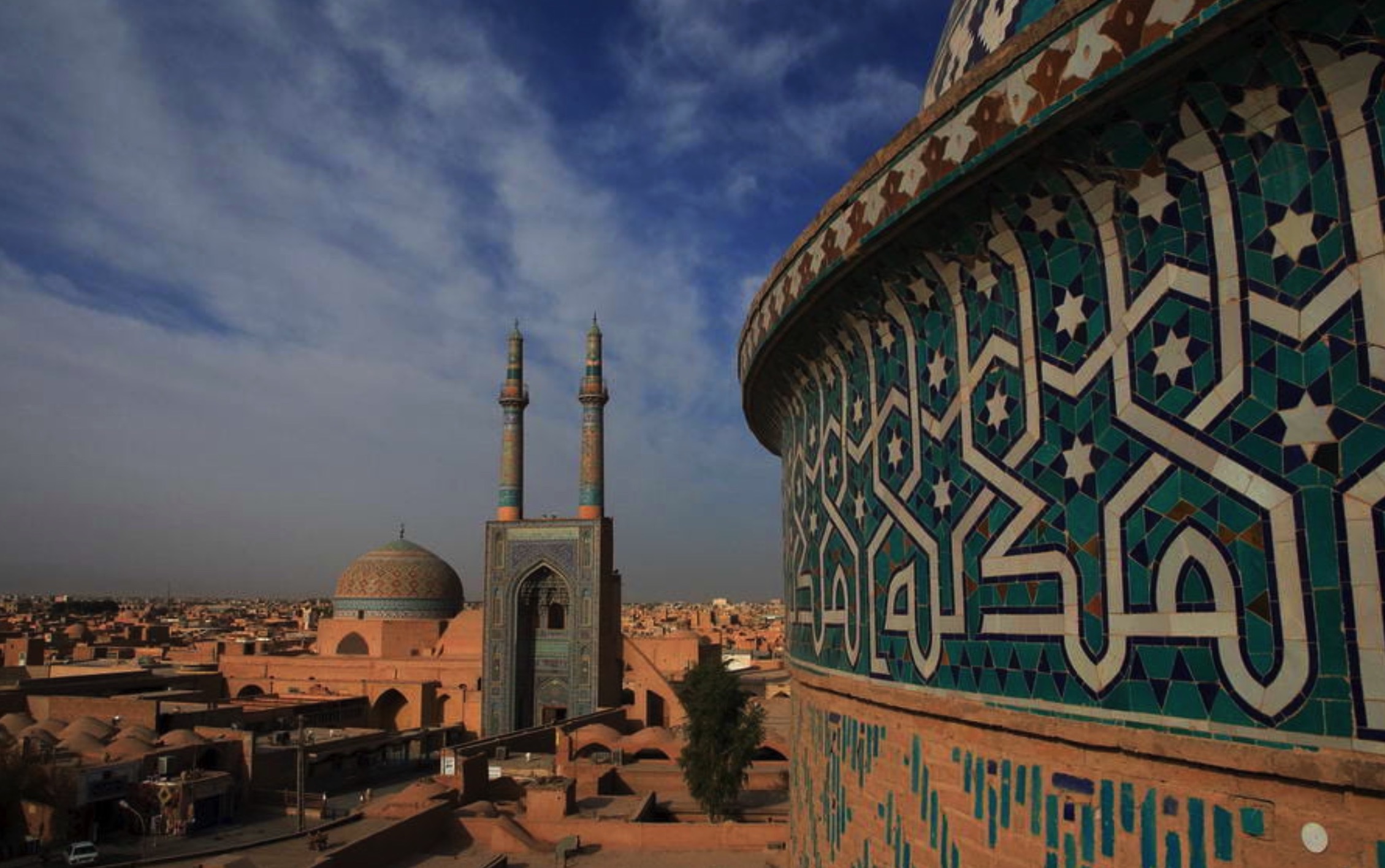 The one other thing I saw was this ancient gym, down a small ally with an old lady out the front taking your $1 entrance fee, you go down some stair into a small circular room with a sunken circular floor. It was abut the most tourists I had seen in Iran- about 50 which all were from a tour bus- watching around the edge as around 10 men, ranging in ages from about 10 years to around 60years did crazy old school exercises to the beat of drum played by a young guy who sung Hafez poetry. Its an ancient tradition and the men used these huge wooden weights and answered the drum players in chants every so often It smelled like a gym, it was weird but very cool, sitting in this little room, with sweaty old men and this guy going nuts on the drum- he had the most amazing voice, I think he was the best part. It was all so strange, but good strange. Tourism in Iran is just a totally different experience, and things are not done for tourists- because there are hardly any. I went back again the next night with a couple of English guys who I then took the bus with to Esfahan, mostly just to hear the guy sing. 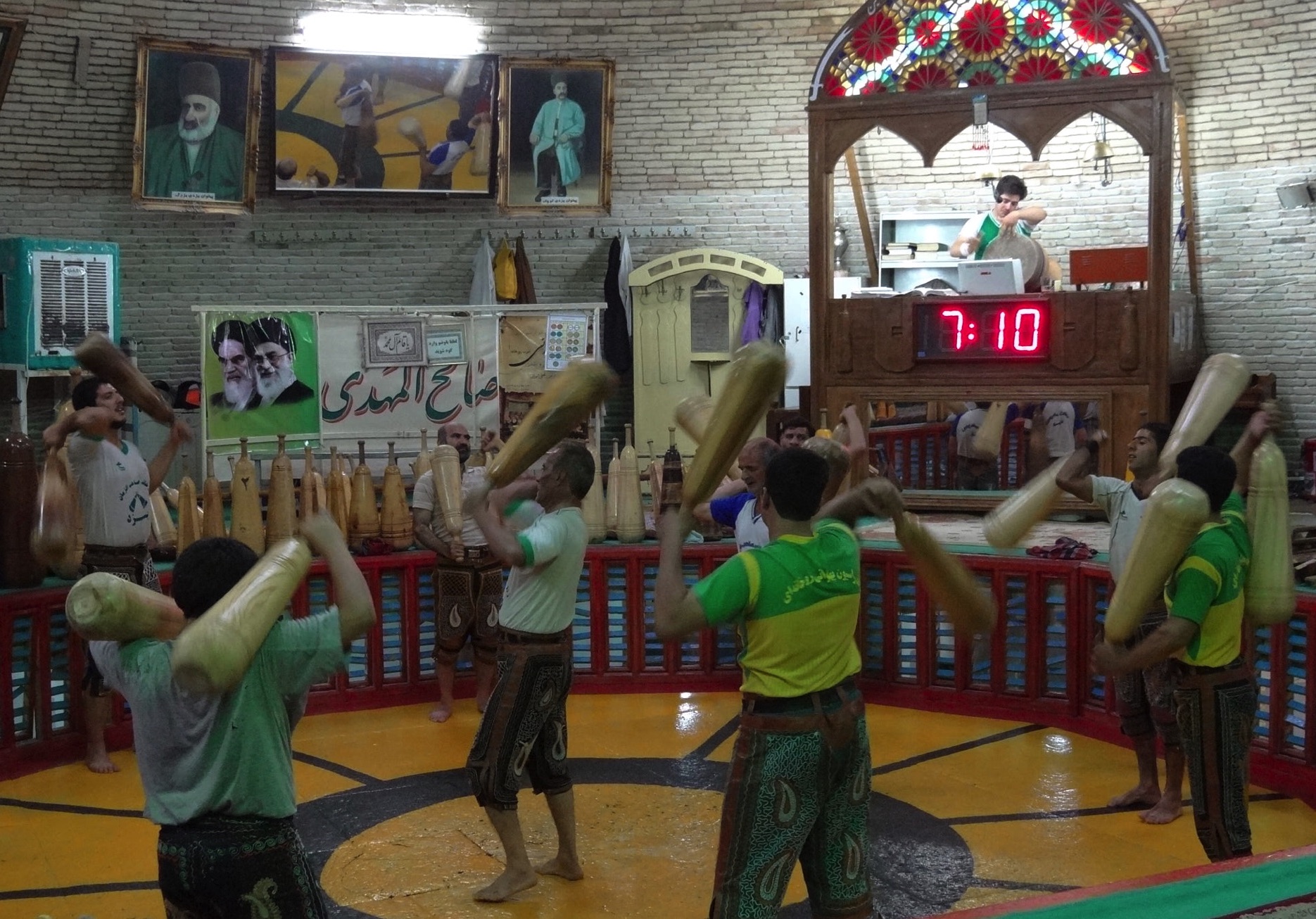 The thing is that if you’re a tourist in Iran then that’s where you should visit, Yazd, so you come across some really interesting people and interesting hotels / guest houses to say. I guess you can safely assume that all tourists in Iran are somewhat interesting and not your usual ‘lets get drunk in different European cities/south-east asian countries’ tourists. A few people had come over from Pakistan, which is now on my list of places to go. Several had been, or heading to Iraqi Kurdistan, an area of Iraq which is totally safe to visit. One Swiss guy is motorcycling around the world and estimates he will be on the road for 6-7 years, he is now in his second year. People cycling across Central Asia, loads of people who have been through the rest of the Middle East, and lots of people on very long extended trips. I get slightly envious of people on big long trips. But anyway. It was time to move on so I headed with Ben and Julian to the bus station to go 5 hours west towards Esfahan.

how old is yazd, pictures of yazd, videos of yazd, view over yazd city, yazd zoroastrian
0