Golestan Palace is a Royal complex dates back to the Qajar era that is embodying the successful integration of earlier Persian architecture with Western influences. The Golestan Palace is one of the oldest Tehran Tourist Attractions. The Golestan Palace has became the seat of government of the Qajar family, which came into power in 1779 and made Tehran the capital of the Iran for first time. The Palace built around a garden featuring pools as well as planted areas, the Palace’s most characteristic features and rich ornaments date from the 19th century. It became a centre of Qajari arts and architecture of which it is an outstanding example and has remained a source of inspiration for Iranian artists and architects to this day. It represents a new style incorporating traditional Persian arts and crafts and elements of 18th century architecture and technology. 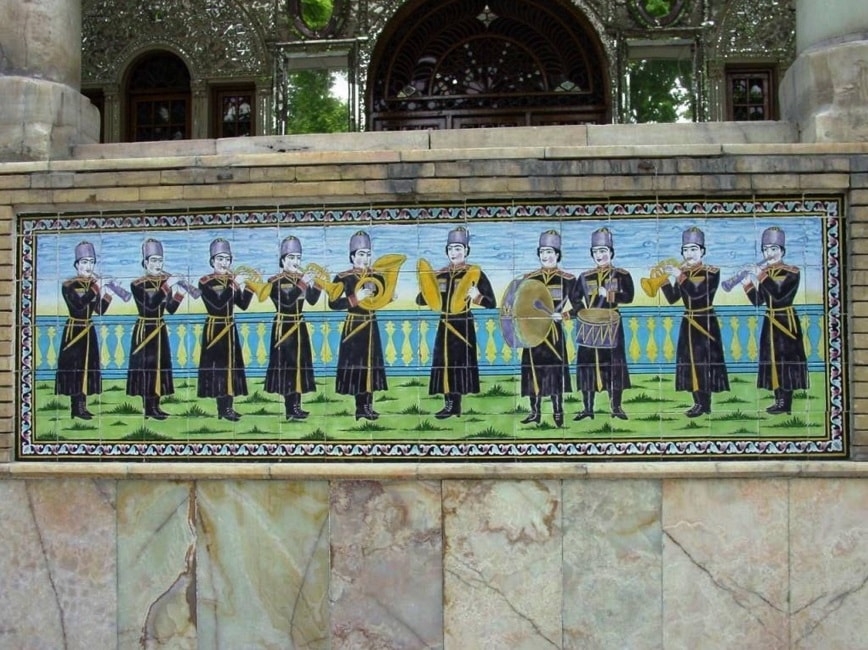 What to see when visiting Golestan Palace?

The Marble Throne (Takht-e Marmar): This spectacular terrace known as Takht-e Marmar, Or Marble Throne, was built in 1806 by order of Fath Ali Shah Qajar (r. 1797-1834). Adorned by paintings, marble-carvings, tile-work, stucco, mirrors, enamel, woodcarvings, and lattice windows. the throne embodies the finest of Iranian architecture. The Marble Throne is one of the oldest buildings of the historic Golestan Palace.

The Hoz Khane (Pool Room): Works of European painters presented to the Qajar court are housed in the Hoze Khane, The Hoze Khane was used as a summer chamber during the Qajar ear. A special cooling system pumped water form a subterranean system of streams (qanats) and in this case the king’s qanat into small ponds inside the chambers. Hoz means pool, thus the name Hoz Khane. The system was designed to pass through as many summer rooms as was necessary. The water was then channeled outside to irrigate the royal gardens.

Talar-e Ayene (Mirror Hall): is the most famous of the Golestan Palace hall’s. This relatively small hall is famous for its extraordinary mirror work. The Hall was designed by Haj Abdoul Hossein Memar bashi (Sanie-ol-Molk).Yahaya Khan Moetamed-ol-Molk,the Minister of Architecture,acted as consultant to the designer.

Talar-e Salam (reception Hall): This Reception Hall was originally designed to be a museum, After the Takht-e-Tavoos (Iranian’s famous Jeweled Peacock Throne) was moved to the Royal jewels collection at the Central Bank, this hall was designated to hold special receptions in the presence of the king, hence the name Talar Salam. Tourists and envoys from European courts received in the Palace during the reign of Nasser-ol-Din Shah, spoke of this outstanding hall comparing it to its European counterparts. The reception hall has exquisite mirrors work. The ceiling and walls are decorated with plaster molding. The floors are covered with mosaic.During the reign of Nasser-ol-Din Shah, this hall was used to exhibit Iranian and European paintings alongside gifts presented to the Iranian court. Royal jewels were also exhibited inside glass cases. These jewels are now housed at the Royal Jewels Museum of the Central Bank.

Shams Ol Emare (The edifice of Sun): The most stunning structures of the Golestan Palace, The idea of building a tall structure came to Nasser-ol-Din Shah before his first European and from pictorial images of European buildings. The Monarch wanted a structure from which he could have panoramic views of the city. Designed by Moayer-ol-Mamalek, construction on the Shams-ol-Emareh began in 1865 and was completed two years later. The architect was Master Ali Mohammad Kashi. The building has two identical towers. The exterior views have multiple arches, intricate tile work and ornate windows. This building is a fusion of Persian and European architecture.

Emarat-e Badgir (The wind tower Building): constructed during the reign of Fath Ali Shah (circa 1806). The building underwent major renovations, including structural changes, during the reign of Nasser-ol-Din Shah. A watercolor rendering by Mahmood Khan Malek-ol-Shoara depicts the original structure prior to renovations. The building is flanked by two rooms known as goshvare (earrings). There is a central room which boasts the finest stained glass window in Golestan Palace. Outside, there are four wind towers of blue, yellow and black glazed tiles and a golden cupola. The wind towers are constructed to allow the cooling wind to move through the structure.

Talar-e Almas (The Diamonds Hall): Is located in the southern wing of Golestan Palace next to the Badgir Building. It is called Hall of Diamonds because of the exceptional mirror work inside the building. The construction of this hall dates to the time of Fath Ali Shah (circa1806). Nasser-ol-Din Shah renovated this hall changing its appearance and replacing the hall’s Ogival arches with Roman ones. He also ordered the walls covered with wallpaper imported from Europe. As the basic structure dates back to the time of Fath Ali Shah, it is only. It is only apt that this hall should be devoted to the exhibition of art and handicrafts from that period.